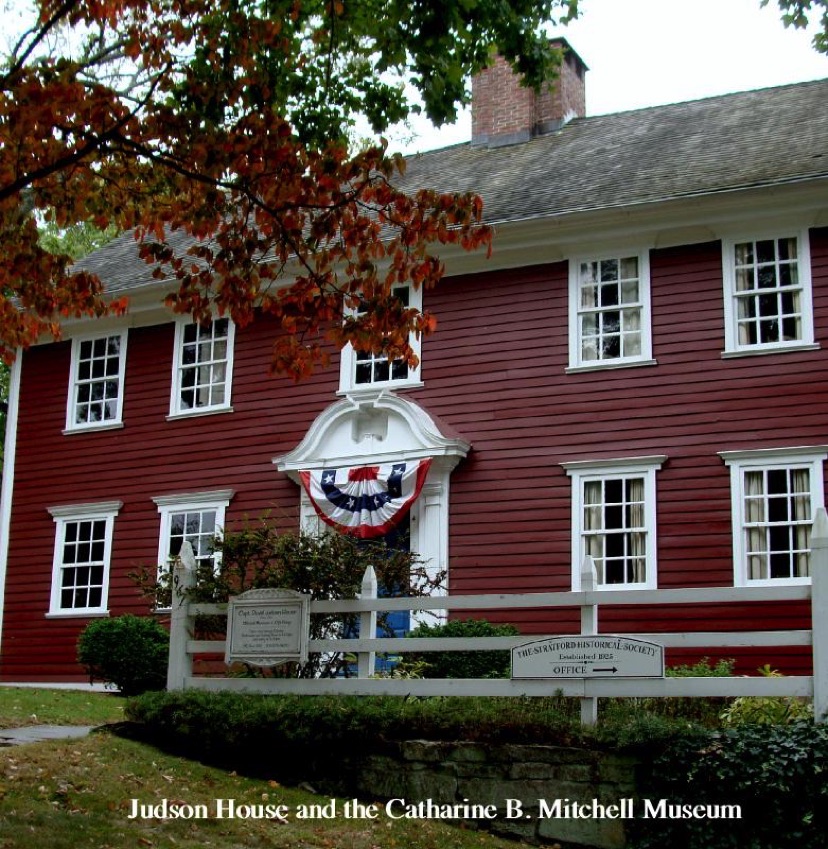 Built circa 1750 by Capt. David Judson on the site of his great-grandfather's 1639 stone house, Judson House is a fine example of Georgian achitecture with its impressive broken scroll pediment entry. It is furnished with period pieces of Stratford origin. The beautiful paneled "west roome" contains an early piano which belonged to William Samuel Johnson, a Stratford resident, framer of the U.S. Constitution, and the first president of Columbia University.

An outstanding collection of Chinese porcelain is displayed in the dining room as well as a circa 1750 Crown Great Chair (Heart and Crown), a form unique to this area. A huge fireplace, complete with period accessories, dominates the kitchen. A rare 18th century clothes press, original to the house, is located in the "west chamber" along with a canopy bed on which is a candlewick spread dated "1808 MB". The fireplace wall of this room exhibits its original paneling. Slave quarters and displays of fishing, oystering, and farming tools are located in the basement.

Adjacent to the Judson House is the modern Catharine Bunnell Mitchell Museum with permanent exhibits of Stratford history and changing gallery exhibits which feature items from the collections of the Stratford Historical Society.

An extensive Genealogy library is located in the Office area of the Museum and is available to the public on Tuesdays and Thursdays from 9:00 am to 2:30 pm year round. Genealogical requests may be made by telephone, e-mail, U.S. mail and in person.

The Beach Family Carriage House: The carriage house, built approximately 1880-1885, was built by the prominent Beach family of 1812 Elm St. The carriage and horse were housed on the ground floor while the upper floor was used for storage of hay and grains.  Before 1909, when electricity came to Stratford, the Beach family owned a gasoline-powered electric generator which benefited several houses in the Elm St. area. The original green glass insulators on the building probably date to the turn of the 20th century. The upper level was used for many years for Halloween parties and other family and neighborhood gatherings.  In late February 2004, the Stratford Historical Society was given the opportunity to acquire and move the Carriage House which was in the way of development of the property at 1812 Elm St. The Society accepted the challenge, saved the building, and celebrated its re-birth in August 2005.

Judson House and the Catharine B. Mitchell Museum